At the beginning there were marvellous images, hypnotic. Hints from the world of music with record covers of the B52 and of the Visage. Fabio Di Nicola walked with his feet on the ground but his mind wondered through a parallel space, where clothes and music  created the perfect stage for representations that left behind, step after step, a fascinating lure. 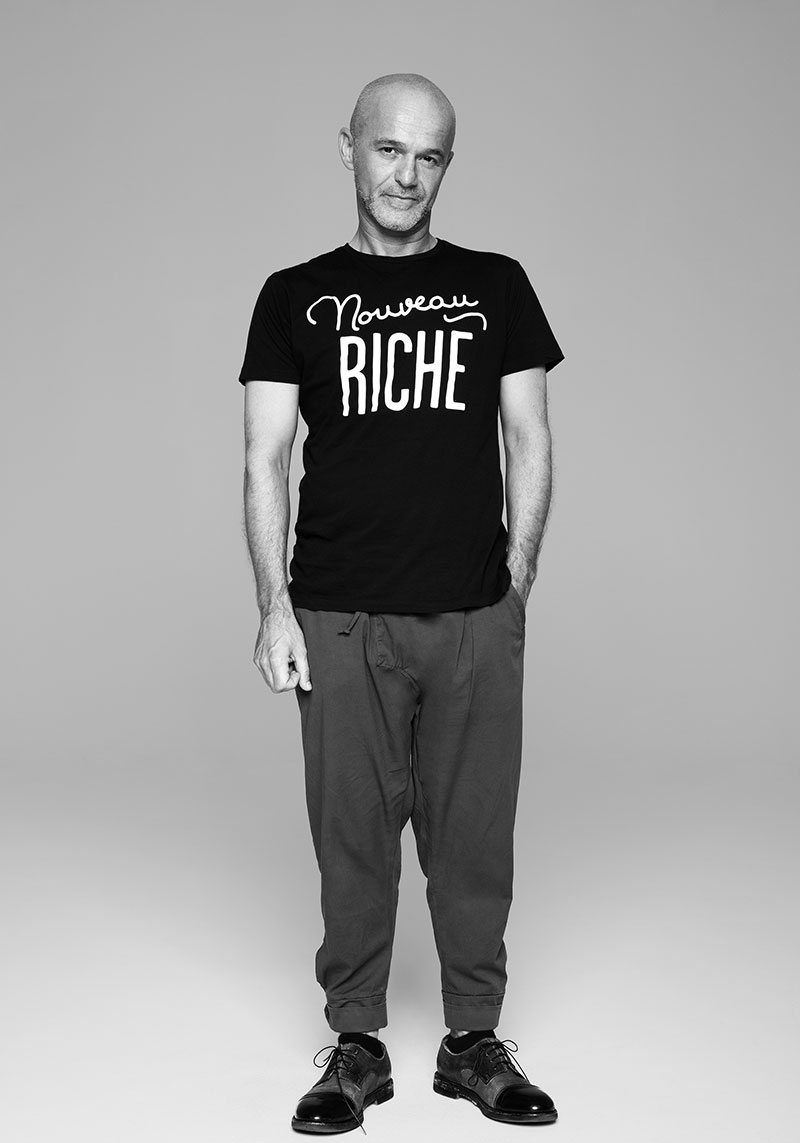 Hard for passion to fade when it has been with you since you were twelve, hard to escape a destiny that was meant.

Scientific high-school is an experience that restrains Fabio and his desire to express himself, he therefore decides to follow his instincts and changes route. He attends the Institute of Arts then the Academy, years of set and costume designing where clothes and situations materialise showing a strong inclination towards cultural vanguard.

In the meantime he is also a DJ in one of the local radio networks, Fabio and music seem to chase one another like lovers, till they finally catch up in London. It is the “chosen country”, where it doesn’t matter if you’re there to wash dishes when you are breathing the same air that your life’s icons are and when the underground scene embraces you with all its power.

Back in Italy, he takes part in various competitions for new talents and puts up a small company, the “Groupe De Bosch” that moves among different Italian discotheques where the alchemy of fashion, music and show gives life to a latent theatrical mood. Fashion evolves into costume, experimentation becomes profession.

Fabio finds his place in theatre, writing good scripts and gaining notoriety and approval. Lighting and settings are influenced by the German expressionism of cinema, stages are filled with movements that recall gestures of dancing and miming and Fabio finds himself expressing an unknown soul that, with no real mentor, frees his concealed intuition.

Great precursor of the relation fashion/art, Fabio Di Nicola, like all foregoers, finds that the historical moment is not on his side, what is nowadays naturally interpreted and understood fashion-wise, did not belong to the images of the time. Nevertheless Fabio wants to leave his mark, precise and clear.

His way opens up unexpectedly: he shows at the “Brussels Fashion Days” in 1990, a few years later he attends the “Biennial for young artists”, he shows in Tunisia, Greece and Holland and the designer, who dreamt music, starts to clearly shape up.

When, in 1993, Fabio is second place at the “Premio Coveri” in Venice (Italy) he is confronted with the choice: on one side the world and profession in fashion with his first co-operations for well-known brands, on the other the numerous publications on his works in the vanguard theatre.

With no hesitation Fabio chooses fashion. He starts from scratch, he learns to cut and sew, he works for a company with a strong marketing capability that produces men’s wear. Five years of passionate working allow Fabio to find his way of expressing his creative talent and understanding of the market’s rules. In 1998 Fabio founds his company and opens a fashion consultant studio that works non-stop for eight years.

Fabio Di Nicola becomes a brand and the success of his collections need total dedication. The great ability and feel for fabrics, his instinct in recognising and taking advantage from them livens a further passion which will push Fabio into working side by side with fabric producers, developing one of the winning characteristics of his brand: extremely high quality.

A very particular sense for colour and a great passion for knitwear, a thread that shapes into a single and unique garment, allow Fabio to experiment in this field, knitwear becomes the masterpiece of his collections.

An incredible eye towards the perfect fit, an innate gift that gives him a natural capability in transforming a detail into very unique and precious shapes.
His two labels, “Fabio Di Nicola” and “FDN”, are currently produced in Italy. Music and artists which have inspired him since youth, are today protagonists of the limited edition of ” T-shirt iconique”.

During those years he also been involved in important movie as clothing designer as the ones he did for Wim Wenders’s Palermo Shooting.

But also art involved him, especially Thayaht who stand as an icon for him and the deep knowledge of his art took Fabio around Italy to speak about this amazing artist Nowadays , theaching menswear at the famous IED in Milan, still collaborating with many menswear labels as designer, he moved towards: a new direction.

Where clothing are meant to be quality items with an artistic and more vanguard design.
Totally involved in men’s needs and desires he now provide for limited edition of his design where every inch is well thought , every stich is part of a dream, every color recalls a specific mood.

25 yrs are passed, every single day into this amazing machine called fashion.